Not a Tragedy, Suggestions, Better Brainstorming, and a Country Churchyard

Welcome to all our new subscribers! ButWhatFor? is about anything, as long as it’s interesting. Thanks for joining!

First - I am in the UK this week and my schedule is a bit tight, so this week's text will be a bit shorter than normal... and maybe that is a positive thing? 😂

Second - So, last week I put an embedded video link in the Friday email.

That was a mistake.

I heard from a few subscribers that last week's email went to at least a few junk folders - so, sorry about that. The open rate was about 2/3rds of normal - meaning it sounds like that might have happened to quite a few of you. No more embedded YouTube videos going forward!

You can find last week's issue here: ButWhatFor? Four for Friday | No. 039

Someone will always be getting richer faster than you. This is not a tragedy.

Long-time subscribers will know that I have a soft spot for Charlie Munger's one-liners. I think this one popped up on Twitter earlier this week as a reminder that the best thing to do is that best that you can do - and that comparing to how others are getting along is generally only a consistent way to find yourself demotivated.

As the truck rumbled off, I looked at the other group, but they were still sitting there. I quickly wondered which of us was going where, and just as quickly dismissed the thought. The men in the other group weren’t my concern, and as for me, I’d know the destination when I got there.

Comparison is the thief of joy.

So, maybe there is something to that idea...

Other articles based on Charlie Munger:

As I mentioned above, I have had less time than normal outside of work due to travel this week - so, I didn't really stumble across anything worth sharing that would be considered a long-read.

But - what about on your end? Did anything you read this week stand out as particularly interesting?

Right now, we don't have comments working on the new BeeHiiv platform - so if you just reply to this email, I will get it. 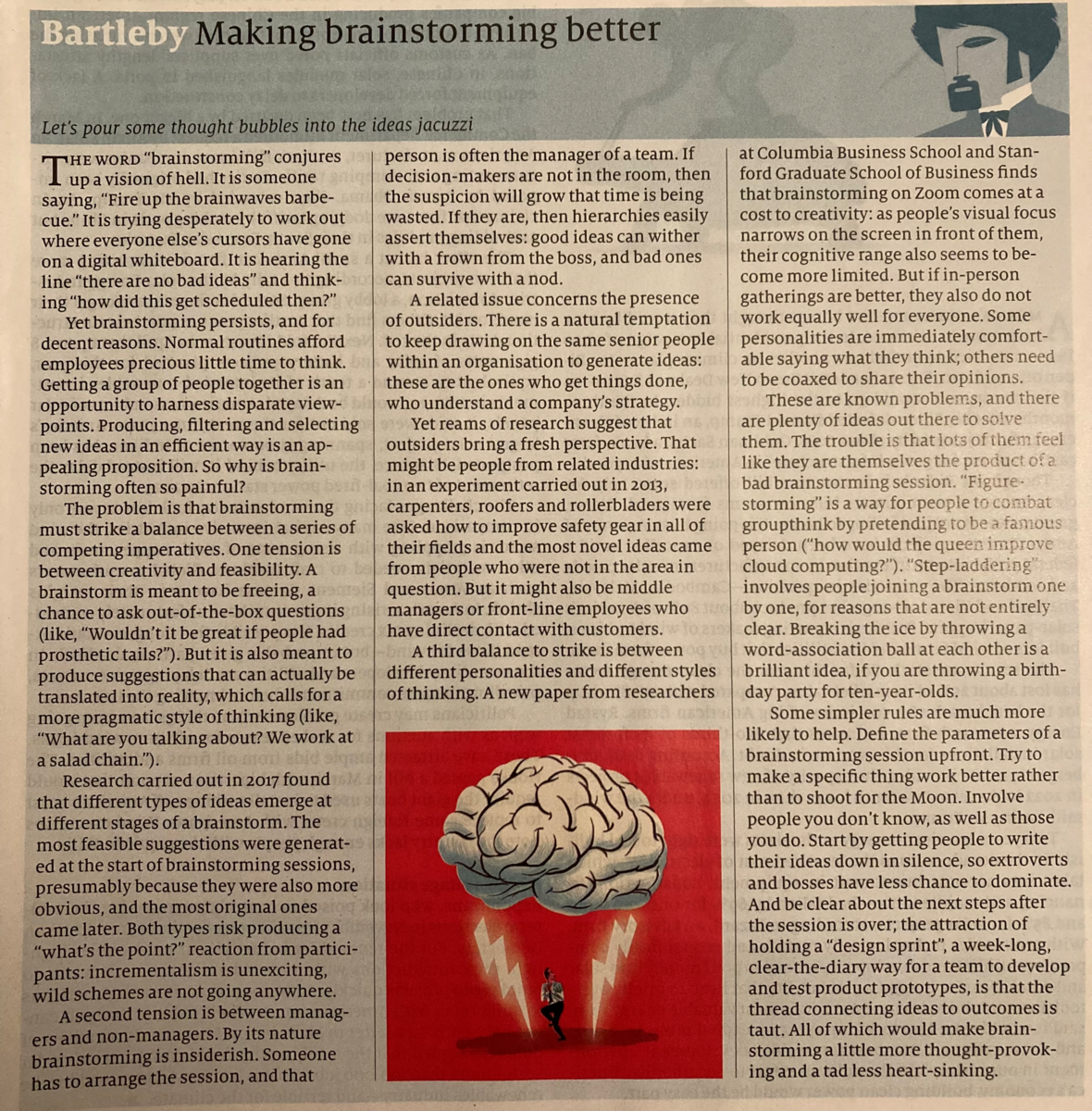 My colleagues make fun of me for still getting the printed version of the Economist... probably because I also have a habit of tearing out pages and leaving them on people's desk... I understand that just sending a link to the online article would be more efficient and scale better for sharing across the team...

But, that is not nearly as fun... so I will continue to tear out pages!

As to the article pictured above - one of the things that I have struggled with over time is having truly effective brainstorming sessions on important topics. If an organization has the wrong culture, is overly political, or needlessly hierarchical, you just end up with either confirmation of whatever the senior person thinks or a game of politics.

The article was an interesting summary of ways to approach brainstorming to see if you can have more effective outcomes - but if you are short on time, the last paragraph has some interesting ideas in takeaway form.

Elegy Written in a Country Churchyard [1751]

But Knowledge to their eyes her ample page         Rich with the spoils of time did ne'er unroll;Chill Penury repress'd their noble rage,         And froze the genial current of the soul.Full many a gem of purest ray serene,         The dark unfathom'd caves of ocean bear:Full many a flow'r is born to blush unseen,         And waste its sweetness on the desert air.Some village-Hampden, that with dauntless breast         The little tyrant of his fields withstood;Some mute inglorious Milton here may rest,         Some Cromwell guiltless of his country's blood.

I had a rather long flight earlier this week, which is great because I tend to not sleep effectively on planes. That would be simpler and make life easier, so my brain thinks this is something best avoided.

I've had Christopher Hitchens' book, Thomas Paine's Rights of Man, on my bookshelf for a while and given Paine was born in the UK, as was Hitchens, I figured I would take the short-ish book along for the ride. Through the ins-and-outs of being half-asleep and half-not-asleep, I managed to work my way through most of the book. Paine is an interesting character and it is unfortunate that, on a relative basis, few American's understand his role in building the frameworks that ultimately led to the creation of the United States of America - a name first used to refer to the collective colonies as a whole, per Hitchens, by Paine himself.

Near the beginning of the short biography, Hitchens quotes a poem by Thomas Gray, a well-known English poet from the 1700s. Gray was somewhat atypical for a famous poet, for he published less than 1,000 lines of poetry across 13 poems in his lifetime despite being popular in his day and offered awards / lucrative literature-related positions in academia.

Hitchens pulls the above stanzas as a reminder that, despite Paine's innate talents, it was not inevitable that he should have impacted the world. Nor was it a given that he would be remembered by the world if he did have an influence - as I mentioned above, he is often not remembered beyond middle school history classes.

Paine had many choices over time based on chance decisions begetting additional chances to make new decisions. The choice to settle down in the English country side when it looked like life could have been simple and comfortable, not attending that party where he met Benjamin Franklin, or choosing to quiet down when his first pamphlets on the rights of men, women, and slaves to choose their own government representation landed him in legal trouble were but a few instances that could have relegated Paine to insignificance if he had done differently.

But, at the same time, for every Thomas Paine, or John Hampden - an English politician that opposed arbitrary taxation and was consequently a favorite reference of the colonists in what would become the United States - or Oliver Cromwell - who ruled Britain after leading the anti-Royalists against King Charles I - there are countless individuals who had equal or greater capabilities that are nevertheless forgotten in the graves of small country churchyards because exceptional outcomes are more chance than they are effort.

But, exceptional outcomes shouldn't be how you define success. And that is what Hitchens was getting at. A man who stood for the right things happened to make a difference that bettered the world because chance intersected with someone who was doing what was right. You can't control chance, but you can be focused on doing the right things.

So, to steal from what I wrote in the article on Eric Haney from the Quote section above:

And it is important in life that you don't define failure as failure to achieve only one specific goal. You can show up prepared and still not cross a specific finish line. 163 men participated in the Delta Force trials, but only 12 were ultimately accepted into the program. Those 151 men were not failures - not even close.

They just had to accept that this Delta Force finish line wasn't one they were going to cross and instead start progressing towards the next.

🚨📬 IMPORTANT: To make sure my emails hit your inbox and don't get lost in junk/spam, I recommend taking these quick steps:

Gmail users: Move the newsletter to your primary inbox:

Everyone else on other email clients:

See here for a full archive of But What For? articles

But What For? Because anything can be interesting