Good with hard work, Baupost, how to grow old, & people who write books

Hard to remember. Hard to put into practice. But easy to feel the pain of inaction when looking backward at what you didn’t try to accomplish.

At Baupost, we endeavor to keep our minds open by engaging in frequent and open debates about every investment; by having a team that is diverse on the basis of background, lived experiences, and ideas; by identifying and following best practices for uncovering new facts and updating our conclusions; by generously sharing knowledge throughout the organization; by undertaking thorough postmortems to learn from both our mistakes and successes; and by trying to separate, as best as we can, the effects of skill from those of luck, so that investment success can be replicable…

As depicted in Daniel James Brown’s exceptional book The Boys in the Boat, an organization must strive to be better than the individuals who make up the group would be on their own.

This is done by pursuing a worthwhile goal through a clear, consistently applied, and ever-improving process. If the portfolio manager of an investment firm just does what she or he wants, then she or he will be building, over time, a cohort of sycophants, which leads to a process that is ineffective and a firm that is far from optimizing the wisdom and perspective of its members.

A better approach is a highly inclusive—and uncomfortably unsettled—one in which everyone’s thoughts are welcome and necessary and yesterday’s conclusions can be debated safely and potentially revised. That’s why at Baupost, every idea, including mine, goes through the same meat grinderof process.

The Baupost Group is a well-known and, depending on your style of investing, a well-regarded hedge fund / asset manager founded in 1982. Today, the group is run by Seth Klarman, and, at least as of 2012, Bloomberg suggested that Baupost was the 4th most successful hedge fund since it was formed. Baupost currently manages ~$30 billion of client’s assets.

One thing Baupost is famous for is highlighted in the above quote from their 2021 year-end investor letter — namely, crowdsourcing ideas from their entire organization, forming opinions, and then attempting to tear them apart. It is interesting to hear the long-term leader of the group explain the process.

How to Grow Old Well

For to those who have not the means within themselves of a virtuous and happy life every age is burdensome; and, on the other hand, to those who seek all good from themselves nothing can seem evil that the laws of nature inevitably impose. To this class old age especially belongs, which all men wish to attain and yet reproach when attained; such is the inconsistency and perversity of Folly!…

I am praising that old age which has its foundation well laid in youth. Hence it follows— as I once said with the approval of all who heard it— that that old age is wretched which needs to defend itself with words! Nor can wrinkles and grey hair suddenly seize upon influence; but when the preceding part of life has been nobly spent, old age gathers the fruits of influence at the last…

For if the ills of which they complained were the faults of old age, the same ills would befall me and all other old men… But as regards all such complaints, the blame rests with character, not with age…the most suitable defenses of old age are the principles and practice of the virtues, which, if cultivated in every period of life, bring forth wonderful fruits at the close of a long and busy career, not only because they never fail you even at the very end of life—although that is a matter of highest moment—but also because it is most delightful to have the consciousness of a life well spent and the memory of many deeds worthily performed.

Last weekend, I went snowboarding for the second time in my life. The first time was long enough ago that, more or less, I was starting at square one.

The first time I tried snowboarding, I hated it. It was hard. I fell so often that before the end of the day, I had enough bruises and painful joints that I switched back to skis. The rest of the trip was much easier.

The second time I tried snowboarding, I hated it. It was hard. I fell so often that before the end of the day, I had enough bruises and painful joints to… take a break. And try again the next day.

I am a terrible snowboarder, for sure, but I am going to try to learn it this year. However, falling hurts a lot, which made me think about how much more it hurts to fall today than it did 20 years ago… and how I am getting older.

One of the first articles I wrote that got widely shared is this Cicero article on old age, so I am bringing it back up given we have 1,500+ subscribers more than when I wrote it. Cicero doesn’t talk about snowboarding, but he does cover some topics related to building a life that makes your life in old age more fulfilling.

Back to snowboarding — on the second day, I was sitting at the bottom of the bunny slope completely defeated. I had just completely wiped out at the bottom of the hill because the only way I have figured out how to stop is to fall. I was ready to be done for the day, I took off my snowboot bindings, stood up, grabbed my board to start walking off the slopes, and then I saw him.

A grey-haired guy with amazing sunglasses and a brown, overly puffy jacket. He came sliding down the bunny slope. He wobbled. He nearly fell. He kept going. Some more wobble — and then like magic, he stopped… believe it or not, without falling. He looked at me and laughed, “Damn, this is harder than I thought it would be.”

Ok, Mr. Grey-Haired “I Recklessless Don’t Wear Helmets,” if you can learn this, so can I. Age is just a factor, not the entire picture. I’ll figure it out.

So, I put my snowboard boots back on, took the magic carpet back up the bunny slope, and then proceeded to fall strategically down that hill for a few more hours. 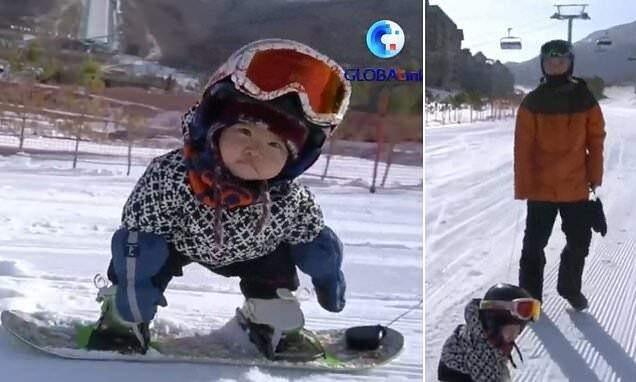 To me, books were written by authors, poets, journalists, scholars, etc.

Turns out, books are just written by people who write books.

Over time, I have found that one of the surest ways pigeonhole yourself into only having the skills you have today is to put those that are good at something you wish to learn on a pedestal above yourself as always having been that way.

Anyone that is good at something today, at one point in the past, previously decided that they were going to do that thing despite not being able to do it.

Don’t prevent yourself from doing what you want just because you can’t do it today.

I used to work at Barnes & Noble. I got a job there to be closer to books. It never dawned on me that one of those books would someday be mine. To me, books were written by authors, poets, journalists, scholars, etc. Turns out, books are just written by people who write books. twitter.com/derek_del/stat…