What Needs to be Done, the Idea of Risk, Futuristic Postcards, and Re-finding

But if you want to go your individual way, it is the way you make for yourself, which is never prescribed, which you do not know in advance, and which simply comes into being of itself when you put one foot in front of the other. If you always do the next thing that needs to be done, you will go most safely and sure-footedly…

Sticking with the idea from a couple of weeks back that it is important to do something as opposed to just talking and thinking about doing something, my brain keeps noticing items that speak to the same concept. Here a writer had asked Jung, essentially, how to live a life worth living.

Essentially, Jung reminds the writer of the same thing — make sure you are doing that which needs to be done and is in front of you, as opposed to always looking forward and thinking about finding the things to do. This week I had a proclivity for thinking instead of doing — so it’s always helpful to have a reminder.

At the same time, it is a balance. Everyone here knows that I love Charlie Munger for his blunt, albeit sometimes crass-sounding, life advice, and as it relates to my investing day job, one of my favorite concepts is brought up in the below quote:

We both (Charlie Munger and Warren Buffett) insist on a lot of time being available almost every day to just sit and think. That is very uncommon in American business.

We read and think.

Sometimes people can find comfort in doing anything so that they feel like they are making progress or justifying the fact that they are getting a paycheck etc. In investing, your job is just as much about choosing not to invest as it is choosing to invest. In fact, you spend most of your time rejecting opportunities.

Somewhat related, I have never been a big New Years Resolution maker — it always felt like I should just be able to make any life changes whenever I wanted to and that waiting around for a new year seemed silly. Well, that was the “thinking” part, and it has been a really good way to prevent the important “doing” part.

Maybe I should go ahead and write down a few things that are important to me in 2022.

How Merchants Invented the Idea of Risk

It’s hard to imagine doing without risk: the analytical instrument we use to calculate the advisability of undertakings that can result in gain or loss. Yet when the word risk entered the languages of western Europe during the 12th century (at roughly the same time as other words used to jigger the scales of Fortune: hazard and chance), it took some time to catch on…

The first known usage of the Latin word resicum – cognate and distant ancestor of the English risk – occurs in a notary contract recorded in Genoa on 26 April 1156. The captain of a ship contracts with an investor to travel to Valencia with the sum invested. The contract allocates the ‘resicum’ to the investor…

Resicum worked a kind of practical magic in these early contracts. Canon law forbade the payment of interest on loans in medieval Europe (as Islamic law did in the eastern and southern Mediterranean). By inventing a bonus paid to the investor in the event of the successful completion of a journey, the resicum provided a workaround…

In college, I studied a couple of different languages — which, by the way, is a great way to not make much progress in learning a new language — and the history of words has always been interesting. Today, I work in early-stage investing, which means I try to support companies that have the potential to change the way things are done in the future but, in the meantime, are constantly burning through cash with little chance of being profitable over the next 5+ years. That kind of investing is generally thought of as carrying a lot of “risk.”

And maybe that is why this article was particularly interesting to me. Apparently, the etymology of the word “risk,” in western languages, can be traced back to merchants that wanted to charge interest on investments while the Church forbade interest from being charged for religious reasons. These merchants picked up the word from Arabic through trading routes, is the guess, as that language has a longer history with the idea of “risk”.

It also reminds me that I recently purchased Michael Mauboussin’s book The Success Equation: Untangling Skill and Luck in Business, Sports, and Investing. While I haven’t even opened the cover — though it is sitting right here on my desk — my understanding is that Mauboussin’s view is that “luck” plays an outsized role in successful outcomes. “Risk,” “uncertainty,” and “luck” are similar concepts, albeit with important differences, so I might need to open that book here in the near term.

Apparently, back in 1900, Germans had high hopes for mankind and the inventions and experiences we would collectively create in the future. While you would think that these ideas would come from the minds of the visionaries, scientists, or inventors, in this scenario the inventor of the future was a German chocolate factory named Theodor Hildebrand & Son…

As part of the 1900 Paris World’s Fair, the Hildebrand chocolate factory decided to create an interesting marketing campaign with a bit of a futuristic nature. The campaign was entitled “Germany in the year 2000” and they included, colorful postcards depicting the theoretical life in the 21st Century.

Altogether, 12 cards depicting the future were produced, and Hildebrand slipped these colorful predictions of the future in the boxes of their best-selling sweets and chocolates.

More for fun than anything else — but also a reminder of how hard it is to predict the future the further away it is — a German chocolatier actually got a few guesses right. Moving sidewalks — Check. Live video broadcasts — Check.

Walking on water with the aid of balloons… well, it looks like we have failed 20th-Century Germans… 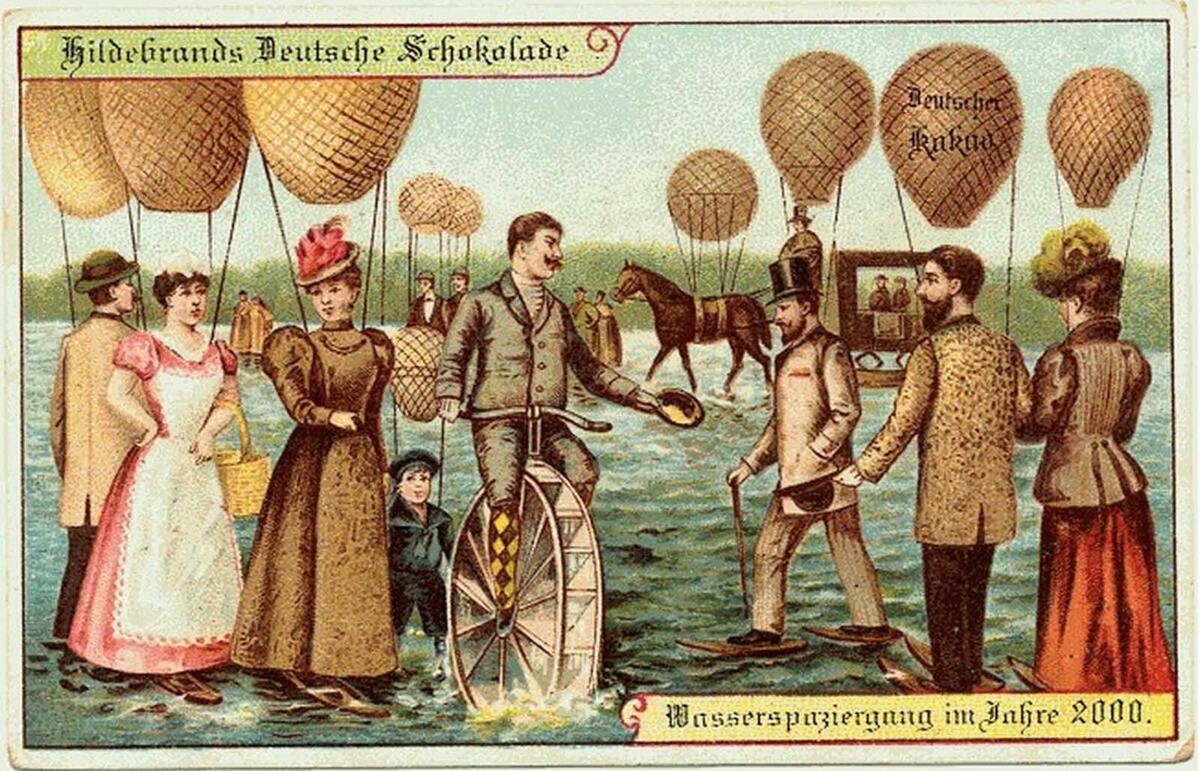 I came across a website called Refind earlier this week. Their slogan is “The essence of the web, every morning in your inbox,” and, essentially, it is an AI-powered article recommendation platform. It learns what you find interesting and recommends new websites / articles.

The algorithms running the recommendations are pretty good, and they hit on some fairly obscure sources that I would not normally come across. So I thought I would share it here as well.

Have a great weekend — and Merry Christmas,