Revolution, what can be controlled, chapters of my autobiography, and textbooks

Welcome to all our new subscribers! I write a weekly newsletter about anything, as long as it’s interesting.

It surprises me now, but most of us pretended that life was almost normal. We made ourselves believe that Phnom Penh was a little island of peace and it was going to stay that way…

We had not been in favor of the revolution. We had not been against it. We didn’t even care about politics much. But now that the revolution had come, we had been bulldozed by it, reduced to the same level as the other exiles around us. And there was no new society building. Just the rubble of the old one.

— Haing Ngor, in Survival in the Killing Fields

Between 1975 and 1980, nearly 25% of Cambodia’s population was killed as authoritarian military leader Pol Pot tried to transform the country into a self-sustaining, communist, agrarian society with a hatred for the educated and white-collar classes.

Haing Ngor, a doctor who survived the events, wrote a memoir of his family’s journey through Pol Pot’s hell on earth. One of the things that stood out to me — and in many memoirs I have read around similar events, this is almost always called out, so at some point I need to do an article on it — is what Ngor is highlighting in the quote above: individuals have a personal responsibility to not be indifferent to tragedy and atrocity as they begin to sprout, lest they turn into something greater than can no longer easily be unrooted.

Focus on the Controllables

When growing up, I was intrigued that my father only concerned himself with those business elements that were controllable. He refused to acknowledge the Depression and did quite well during that period. He was unwilling to talk about recessions or 20-inch snowfalls. He only thought about and talked about those conditions within his control.

I saw this daily in Dad’s actions. I never knew when the country was in a recession because Dad wouldn’t talk about it. People would suggest we close the store on Labor Day because everyone would be out of town. He’d say, “How many will be gone?” Of course, we’d stay open and do just fine. He taught us to concern ourselves only with those things over which we have control. I thought he was unique in this until I realized this is one of the key common traits of highly successful people. Those folks are never victims; they take what comes and handle the situation. The rest is a waste of time.

One of the easiest ways I have found to be ineffective is to try to do everything. Even worse is spending time on those things over which I have no influence.

Oftentimes, I can find comfort in useless action — spending time on something gives the illusion of having control over that thing — when in reality, transparently accepting a lack of control to focus on what actually can be influenced would improve outcomes. 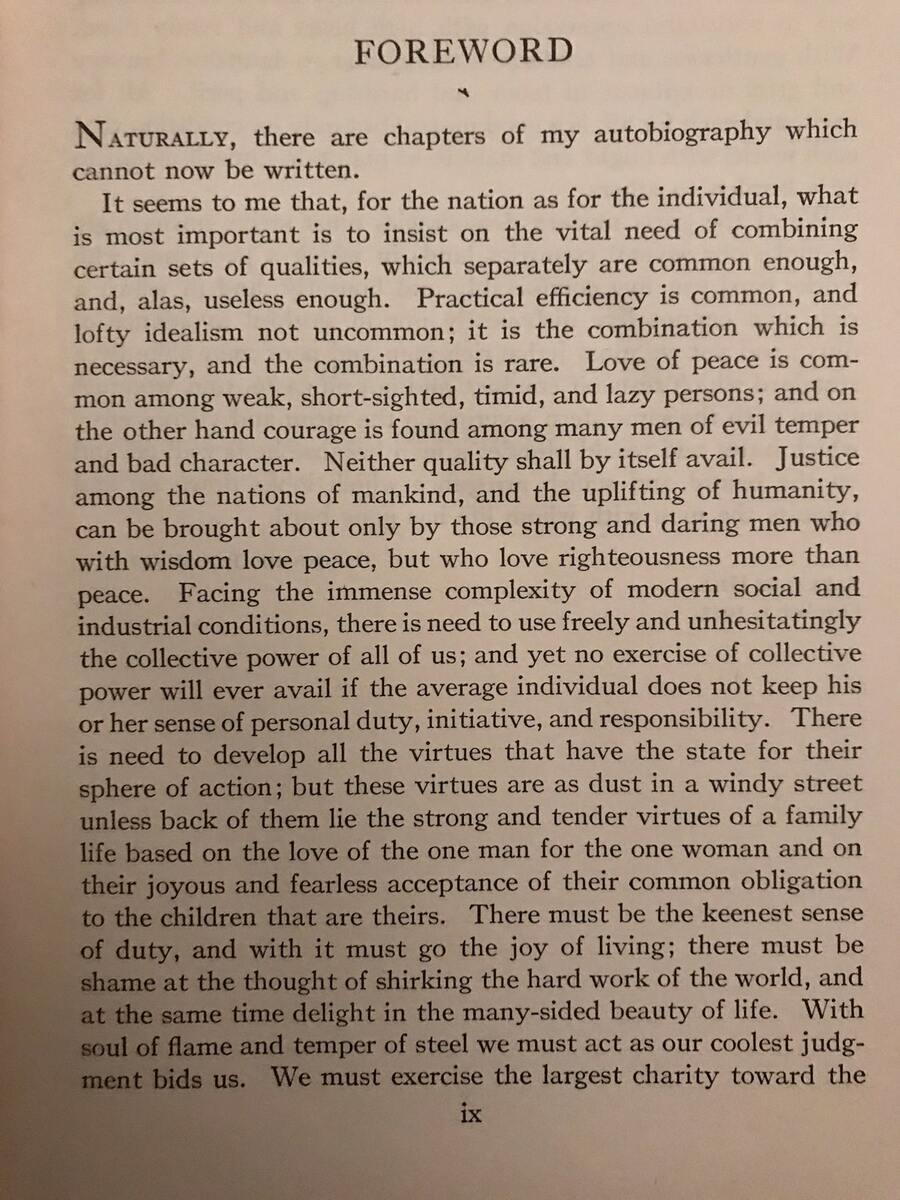 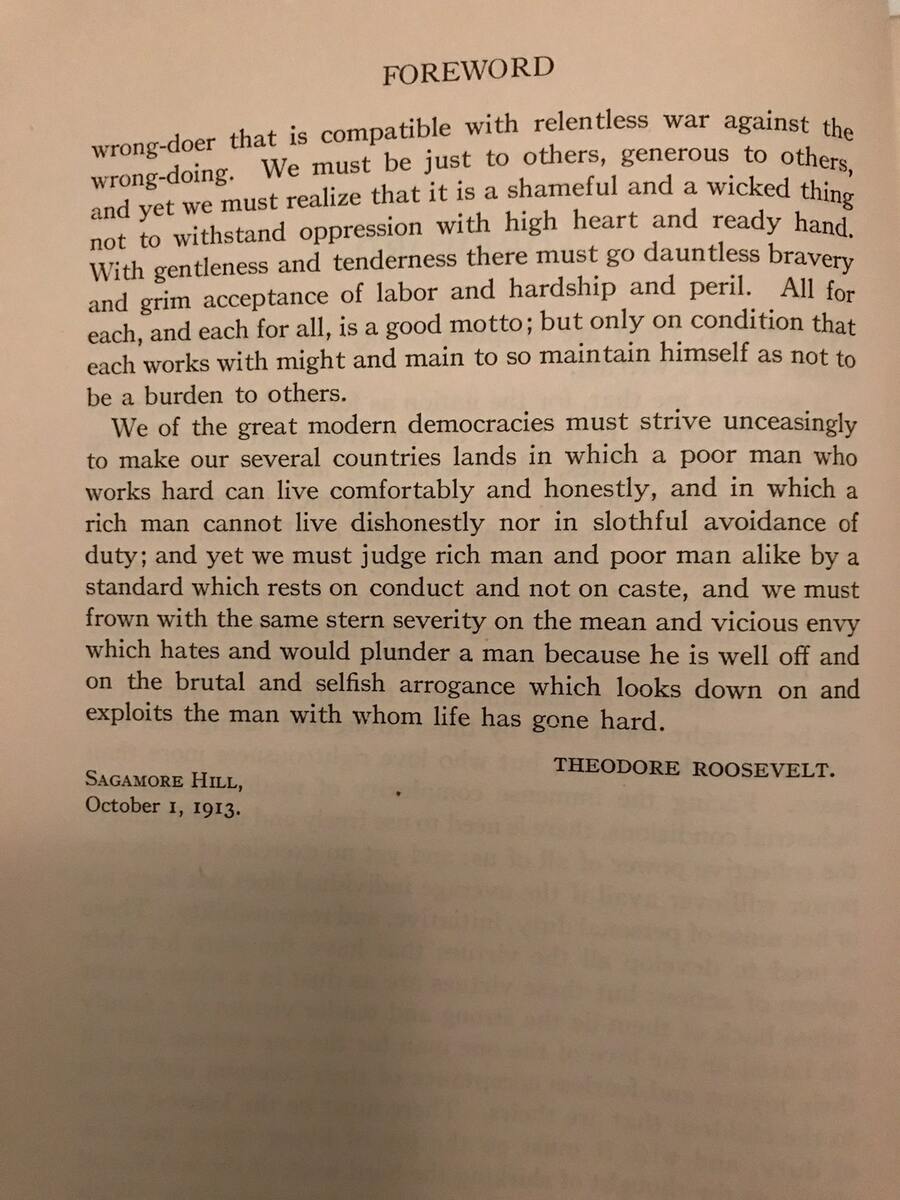 One of the things that I love about Theodore Roosevelt is how he constantly focuses on the responsibility of individuals, and how competent individuals taking on responsibility translates into a stronger whole.

(Pictures from a 20-volume, 1926 printing of The Works of Theodore Roosevelt, which I recently spent too much money on acquiring…)

During grad school and for many years after I'd browse the required texts for all the classes and buy any that seemed interesting. I discovered a lot of good books for the first time this way. twitter.com/jachiam0/statu…

This reminded me of Charlie Munger’s speech A Lesson on Elementary Worldly Wisdom. It is important to be a multidisciplinary thinker and pull your mental models from various disciplines, and oftentimes, a 101-level understanding in multiple fields can be enough.

This is Water | David Foster Wallace: What the hell is water?

There are these two young fish swimming along and they happen to meet an older fish swimming the other way, who nods at them and says “Morning, boys. How’s the water?”

And the two young fish swim on for a bit, and then eventually one of them looks over at the other and goes “What the hell is water?”